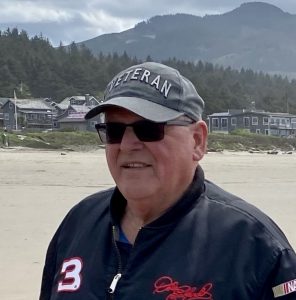 Ron was born in San Francisco, CA, to LaVerne D. and Christina Marie White. He is survived by his brother, Wayne White (Theresa), VA and sister, Joan Cross (preceded by Rick), CA. In 1962, Ron graduated from Jefferson High School, where he proudly set numerous records as a track athlete.

After high school and work for the San Francisco Examiner, Ron enlisted in the Air Force in 1965. He married Ethel Sierra and together they started their family. He worked as a jet engine mechanic during the Vietnam War. Ron was stationed in Marquette, Michigan, where they welcomed their daughter, Donna Lynn White (Corsell) and then in London, England, where their son, Ronald Joseph White, Jr., was born. After being honorably discharged in 1969 from the Air Force, Ron and his family moved back to the San Francisco Bay Area, where they raised their family for 13 years. After his military service, he returned to work as a driver for the San Francisco Examiner while attending San Jose State University. He earned a Bachelor of Science in Psychology in 1971, being the first in his family to earn a college degree. A born entrepreneur, Ron became a real estate agent working for Century 21 before creating his own real estate agency, White & Associates. In 1983, Ron received a job opportunity in the semi-conductor industry that allowed him to relocate his family to Medford, Oregon, for four years before moving to Beaverton, Oregon, and launching a 26 year career as an Allstate Insurance Agent.

Prior to retiring in October 2012, Ron built his Allstate agency to one of the largest in the Portland area. With his strong work ethic and exceptional sales success, Ron earned numerous sales awards including three coveted national Chairman’s Circle, 6 National Conference and 11 Honor Ring awards. As a hobby, you would often find him running during his lunch breaks to prepare for his next marathon. As many knew Ron, he was an overachiever and strived to achieve his goals. The year he turned 50 years old, he set a personal goal to run five marathons that year. He quickly achieved that goal and earned six more medals in several states for a total of 11 marathons. He proudly let everyone know he ran a marathon with his son, Ron, and during his last race crossing the finish the line at the Portland Marathon, arm in arm with his daughter, Donna. He was proud of his marathon medals and had a story to tell for each. Additionally, he ran several Hood-to-Coast races and completed a 50’ bungy jump off a crane!

Ron was a lifetime member of the Knights of Columbus, Council 14802, at Holy Trinity Church. He enjoyed relaxing with his boat, fishing, golf and Nascar.

After retirement, Ron and Ethel moved to Cannon Beach from Portland with their dog, Toby, to enjoy the beach life. Ron was diligent about getting his “10k steps per day” and found enjoyment in making wood projects for family, friends, and donating to the community. Ron and Ethel traveled extensively, enjoyed taking cruises and often drove to California and Arizona to visit family and friends. During the summer they also enjoyed using their boat while camping around Oregon and crabbing/clamming in the Nehalem Bay. You could also find them at local happy hours and playing pinochle with their friends.

Ron was diagnosed with Acute Myeloid Leukemia on October 25th. His journey was short but passed peacefully like he wanted. To create awareness for those living with AML, the family created a foundation, Stand Up 4 AML, to pay it forward for the next patients and families.

A funeral mass will be held from 11:00 am-12:00 pm at Holy Trinity Catholic Church, Beaverton, Oregon on Saturday, March 5th, with viewing from 10am.